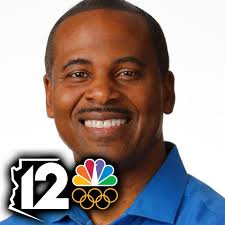 Former 3TV colleague Gil Tyree and Bruce Cooper were together in a elevator at Bank One Ballpark (now Chase Field), when Billy Crystal steps on, looks at Coop and says, “Luther Vandross?!”

Charles Barkley – Suns/NBA Legend: At Suns training camp in Flagstaff, asks to borrow Tyree’s car. Barkley says to Gil, “If I wreck it, I’ll buy you a new one.” Coop was with Gil and said, “Can you imagine if Chuck gets in a fender bender and has to buy you a new car.” The car was a Nissan Elantra.

Jim Escobedo – Former Channel 12 Sports Photographer  “During a Suns v Lakers playoff series in LA. After a long day of work we went to grab some food in Marina Del Ray. Coop doesn’t drink much alcohol. We all orders a few cocktails and Terry Junttie a Photographer at Channel 12 ordered a Long Island iced tea. Coop not being much of a drinker had no idea that a Long Island iced tea contained several shots of alcohol. Coop thought it was a regular ice tea and was delicious and ordered a second one. When we got up to leave Coop he was a little staggered and everyone was laughing at him and I think he had a little bit of a headache in the morning.

Jude LaCava – Former FOX10 Sports Director: “Bruce became a legendary figure especially with his high school football show on Friday nights. He worked as hard as anyone in the market and simply can’t be replaced. We became friends and shared stories about loss in our lives despite being competitors. Coop was and continues to be one of the most genuine people in the business that isn’t always real. I am fortunate enough to call him a close friend. He made a huge mark in Phoenix and I consider him an iconic figure.”

Doug Tammaro – Arizona State Athletics: “When his son blocked a punt in his freshman year against us and scored a touchdown, you could tell how conflicted Coop was. He was so proud of his son, but yet he was just as mad that his damn Sun Devils had a special teams error.”

Chris Peterson – Sports photographer 12 Sports: “First Cardinals game I covered with him, Adrian Wilson at the podium, I double punched (started recording, stopped recording without realizing it). I thought I was going to get toasted. I told Coop about my screw up and he smiled and said, “Don’t worry about it brotha, will get him later.”  I am going to be a bit lost without him. I love that guy.”

John Gustafson – photojournalist 3TV/CBS5: “We used all his “Coopisms” like, ‘I tell you what!’ or ‘That is extremely correct!’ What sticks out so much is how loved he is by his peers.”

Kevin McCabe – Former Valley TV Reporter,current 98.7 FM radio host: “Coop showed me that we could laugh and love each other while were were in the process (of competing). Showed me how to have humility. Just seeing him and hearing him brings joy to me.”

Paola Boivin – Cronkite School, Arizona State: “Bruce added a huge dose of class to the Valley sports scene. Infinitely generous, always upbeat and a role model for young journalists of color who longed to see someone who looked like them on TV. He was a trailblazer and workaholic, but more than anything. just a good, good dude.”

Craig Fouhy– ABC 15 Sports: “Suns at Spurs – Western Conference Finals at Shoot-around – The media asks Alvin Gentry for restaurant advice.
Gentry says, ‘You’ve got to go to Rudy’s BBQ.’”
“So we all head to Rudy’s for the first time. Coop orders some peach Cobbler for dessert…but he takes it back to his hotel room and puts it in his refrigerator and forgets about it.”
“He tells us on the next trip to San Antonio that he forgot the Cobbler and never ate it.”
“Next trip to Rudy’s… Coop’s in line behind us and we tell the folks at Rudy’s not to give him any peach cobbler because he left the last one in his hotel fridge.”
“So at first they turn him down and tell him they can’t give him any because he won’t eat it. We all have a big laugh… and Coop becomes known as Bruce Cobbler the rest of the trip…fun little story about Coop and his LOVE for Die-ssert as he calls it!”
Jody Jackson – FOX Sports Arizona: “Coop has been a joy to share media rooms with for the last 20 years. Let’s face it, we all spend a lot of time together and there is not a human on earth nicer than Coop. When I first came to town I covered every sport. I spent a lot of the “Football Monday’s” talking to Coop about the games. We would be at ASU and then the herd of us would follow to the Cardinals.”
“We agreed or disagreed on coaching decisions and the players, but more than anything I loved his passion for the sport. I won’t get into the 4-2-5 defense I think we used to agree we hated it!! Sorry Dirk.”
“I’m so happy that he and his wife will get to enjoy life without the craziness of a sports schedule. The retirement game is played on your clock, Coop!”
Jeff Schneider – Executive Producer 12 Sports: “When we did “Friday Night Fever,” one year we were sponsored by Pizza Hut, they would bring pizza for the kids. When we were done, we’d always have plenty of extra pizza. Coop would go find people who were working in the stands at the stadium, the maintenance guys, the ticket takers, the parents who were volunteering and he would hand deliver the pizzas to these people to make sure they got fed and they got taken care of. To me it speaks to the compassion and the caring, the genuineness of what Bruce Cooper is all about. I’m going to miss the hell out of him and will miss him to death.”
Eric Sorenson – Executive Producer Sports360AZ.com: “Coop knew I went to TCU and that I grew up a San Diego Chargers fan. He would ask me about LaDainian Tomlinson and want to debate about were LT would rank with present day running backs pretty much every time I saw him. He’d always tell me the Chargers would never win a Super Bowl under Marty Schottenheimer. I always hated to hear that but deep down I knew he was right.”

Cam Cox – Anchor/Reporter 12 Sports  “I TELL YOU WHAT… I will miss working next to my brother from another mother.For the past 6-years, I worked alongside Coop (seriously – our desks are right next one another).I’ve spent more time with Coop then I’ve probably spent with my actual family during that time.We laugh a lot, and in a business that can be so demanding and stressful, that positivity is needed and it’s contagious.By the way, if you ever run into Coop and need a good laugh, ask him who Luke Skywalker’s father is…We argue about everything – especially sports (just ask anyone in our newsroom haha), but at the end of the day, we also spend hours talking about life.I could point to so many memorable moments – but the thing I’m most thankful for… is Coop’s friendship.

Coop is leaving 12News, but our friendship is going to continue far beyond that. I’ll always be #TeamCoop.

I’ll still get early morning phone calls on my days off, and most importantly, we get to continue to this friendship without daily deadlines – maybe I’ll get him to pick up the game of golf? Maybe.”

Two years ago, Bruce and I were in Tucson for a Arizona vs Arizona State basketball game. After the game ended we went back to the locker room to wait for ASU players and coaches to be brought out for interviews. A photographer for the network that broadcast the game was set up in the middle of this tight hallway space outside of the ASU locker room. As we were all getting in position to ask questions the photographer starts pushing  and yelling at Coop. This dude was losing his mind, while Bruce was calmly trying to settle him down even though I thought for a moment the guy might starting swinging.
One night the two of us sat at a Buffalo Wild Wings for a couple of hours talking about the death of his son.
One very, very hot afternoon  a couple of years back I stopped by Basha High School to see Bruce. He had stacks of pizza boxes and the Basha cheerleaders standing out in in the  sun. He wasn’t happy that the station had skipped a couple of his segments because of “breaking news.”   “I feel bad for these young ladies standing out here in the heat and we can’t get them on the air,” he told me.
While you would see him on Friday Night Fever, you wouldn’t see him still pushing video and content to the web well after the show was over into the wee hours of the morning, only to be back the next night at Arizona State and Sunday at the Cardinals.
In sports broadcasting, you work nights, weekends, and holidays. That’s just the way the gig is laid out. I’m happy that Bruce will take a break from the hamster wheel of local TV sports and get to enjoy life for a bit until his next door opens…