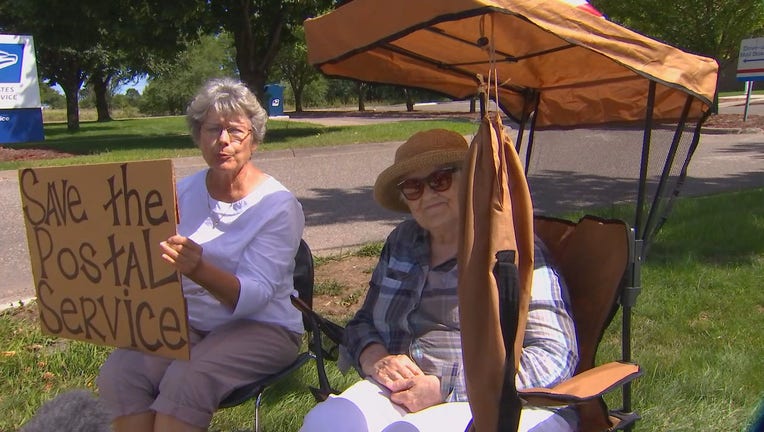 Two women protest changes to the postal service outside the Monticello Post Office.

(FOX 9) – Lawmakers on Capitol Hill are looking for ways to ensure the U.S. Postal Service won’t be disrupted during the election, but folks in Minnesota are doing what they can, too.

Sister Carrie is one of them. She made her voice heard by sitting outside the Monticello Post Office Monday afternoon.

Minnesotans protest possible changes to the USPS outside a Monticello Post Office.

“People have honked their horns, waved, thumbs up. Very positive,” she said. “I just hope our sign piques an interest.”

Donna Flemming joined Carrie later in the day. She is also worried about the fate of the USPS.

“So many elderly people get their medicine through the mail,” said Flemming. “It’s beyond a hardship for them. It’s life or death.”

1,200 miles away, in New York City, there was a protest of another kind. It came in the form of a lawsuit alleging that President Donald Trump and Postmaster General Louis DeJoy are trying to ensure the Postal Service can’t reliably deliver election mail.

The lawsuit seeks a court order to force adequate funding prior to November’s election. As of Sunday, the Washington Post said Minnesota Attorney General Keith Ellison was weighing his options for a similar suit.

However, White House Chief of Staff Mark Meadows says Americans do not need to worry, ensuring that mail sorting machines will not be taken off line between now and the election.

DeJoy has made sweeping changes when he came on board two months ago, citing revenue declines in the USPS. The post office has lost money for 13 years straight.

Now, mail delays have sparked controversy and in Minnesota communities, neighborly political debate on the topic has occurred.

Sen. Tina Smith will be at the Eagan mail processing center meeting with postal employees Tuesday to discuss the problem.

DeJoy is expected to testify before congress next week.