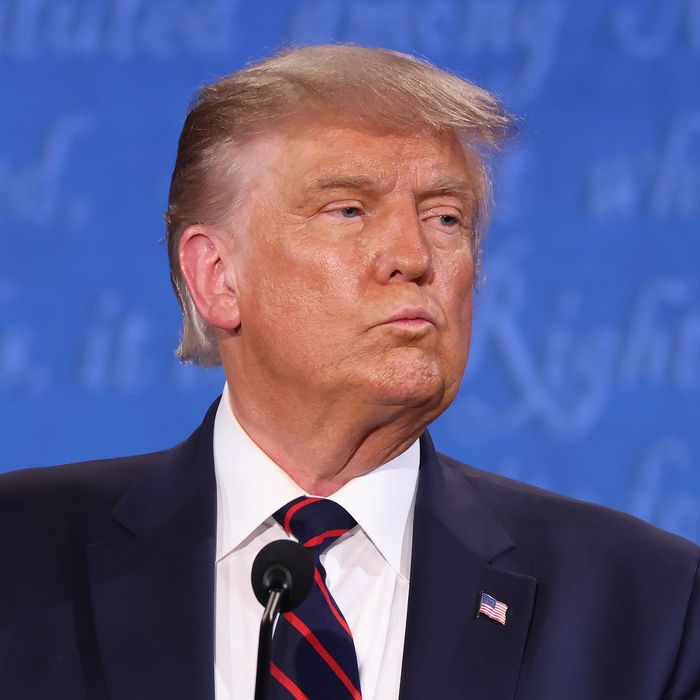 Tuesday’s presidential debate was an opportunity for both candidates to clear an incredibly low bar: not being incoherently senile, in Joe Biden’s case, and unequivocally condemning white-supremacist street gangs, in President Trump’s. Biden succeeded, stringing together complete sentences and weathering the president’s interruptions as well as could be expected. Trump did not, greeting the mere suggestion that he denounce the Proud Boys — a white-supremacist group known for initiating violent street brawls against leftists — with derision and equivocation, insisting that “almost everything [in terms of violence] I see is from the left wing, not from the right wing.”

Moderator Chris Wallace of Fox News kicked off the exchange:

WALLACE: [Are] you willing, tonight, to condemn white supremacists and militia groups, and to say they need to stand down and not add to the violence in a number of these cities, as we saw in Kenosha and as we’ve seen in Portland?

WALLACE: Then do it, say it.

TRUMP: Proud Boys? Stand back and stand by. But I’ll tell you what. Somebody’s gotta do something about antifa and the left, because this is not a right-wing problem. This is a left-wing problem.

The mocking tone that Trump struck when he said “stand back and stand by” indicated that he wasn’t especially serious about the question, and wasn’t interested in answering it earnestly. The choice was notable. A president whose Democratic challenger purports to have entered the race because Trump said there were “very fine people on both sides” of a fatal white-supremacist rally in 2017 has ground to gain by opposing brutal white supremacy — particularly in an election where his support has waned most dramatically among voters who disapprove of how he handles national disunity and racial discord, and where Americans trust his opponent to handle “race relations” more than they do him, according to polls.

Trump is not known for suppressing his worst impulses, even to further his political interests, and it’s possible that most viewers don’t even know what a “Proud Boy” is, and thus aren’t especially moved by this exchange. But his decision to equivocate is most illuminating in how it highlights the absurdity of the question. At this point in Trump’s political career, there’s little to be gained or learned by asking him if he condemns white supremacy or white-supremacist violence, because it’s obvious that he doesn’t, and that if he claimed to it would be a blatant lie.

Even worse, it could be a politically useful lie: Trump’s reelection pitch to Black voters is both an effort to discourage them from supporting Biden and tacit permission for wary white moderates to overlook his racism. Whether or not this approach works, to indulge this line of questioning is to muddle some of the modern political era’s clearest dynamics: that Trump won office appealing to an idealized past marked by white hegemony; that demonizing Muslims and Hispanic immigrants was central to his election pitch on the basis that they leeched off the bounties earned and enjoyed by “real Americans,” his supporters; and that whenever protesters objected to such demagoguery at his rallies, he encouraged his followers to violently assault them.

This was all before Trump chose to qualify the behavior of the vitriolic mob that marched on Charlottesville, and retweeted posts describing Kyle Rittenhouse, the teenage militia affiliate who killed two protesters in Kenosha, as justified in his killing spree. None of this is changed or even complicated by inviting the president to formally denounce a weapon he has so enthusiastically wielded. It’s merely an opening for more dishonesty, in denial of one of the foundational ideals of his presidency. Trump has rarely erred in demonstrating where his sympathies lie. Much attention will no doubt be paid to its latest reaffirmation. But it’s worth asking why, almost four years into his presidency, his debt to white supremacy has yet to be accepted widely enough that people can stop offering him chances to pretend otherwise.

Daily news about the politics, business, and technology shaping our world.


By submitting your email, you agree to our Terms and Privacy Notice and to receive email correspondence from us.