BUCYRUS—A little over a year after a local dog was given only a few months to live after being diagnosed with bone cancer, she is still in remission and will be celebrated her twelfth birthday this month.

Cocoa has been with her owner, Bucyrus resident Christie Auck, since she was nine-weeks-old.

“On Aug. 18, 2019, Cocoa was diagnosed with bone cancer that had already metastasized to her lungs,” Auck said.

A trip Auck made to her chiropractor led to the new type of therapy that saved her dog’s life.

“It was definitely a God-thing of how I happened,” Auck said. “The doctor told me about Transfer Factor in immunotherapy supplement that has worked on people and dogs and gave me contact information for a nearby vet that offers it.”

Auck immediately made an appointment with the recommended vet for Cocoa and now credits the all-natural integrated cancer treatment Cocoa received at Tiffin Animal Hospital from Dr. Bob McClung in saving her beloved dog’s life.

McClung, who became a veterinarian 44 years ago, used immunotherapy on Cocoa along with high doses of Vitamin C intravenously and ozone therapy.

“As treatment progressed, the cancer in Cocoa’s lungs completely went away. Each month, an x-ray revealed her affected leg was re-calcifying and the bone was healing. Some initial swelling occurred as her body attacked the cancer cells and caused healthy inflammation. There was some concern after about seven months when we observed a fibrous growth on a different part of her same leg. However, now after a year has passed, even that is now almost gone,” said Auck.

She said after one year of treatment, Dr. McClung was pleased Cocoa’s progress.

“He had last determined her cancer was under control, and very localized, and we would treat it as a chronic condition as a small bump was still present on her leg. Cocoa had arthritis before her cancer diagnosis and that has become her nemesis this past year,” Auck said. “We have learned to focus her NSAID treatment during changes in weather to help prevent colitis caused by an accumulation of long term use of her NSAID. She has had a few bouts of colitis, but has maintained her appetite and mobility and frisky attitude.”

Auck said Cocoa enjoys her walks to Cooper’s Mill and around the block to watch squirrels, trips to the reservoirs and to the park along with an occasional drive-thru treat.

“She is just a bit slower and has learned that she will be sore if she chases any critters. She loves her squeaky stuffed squirrels and she has been spoiled with literally dozens of them as her siblings tend to steal them when she’s asleep,” said Auck with a laugh.

She said Cocoa’s coat is soft and shiny and she has maintained her weight around 70 pounds.

“Cocoa continues to be very vocal, letting me know when she wants something. She is still considered the “alpha female” of our pack of nine,” said Auck. 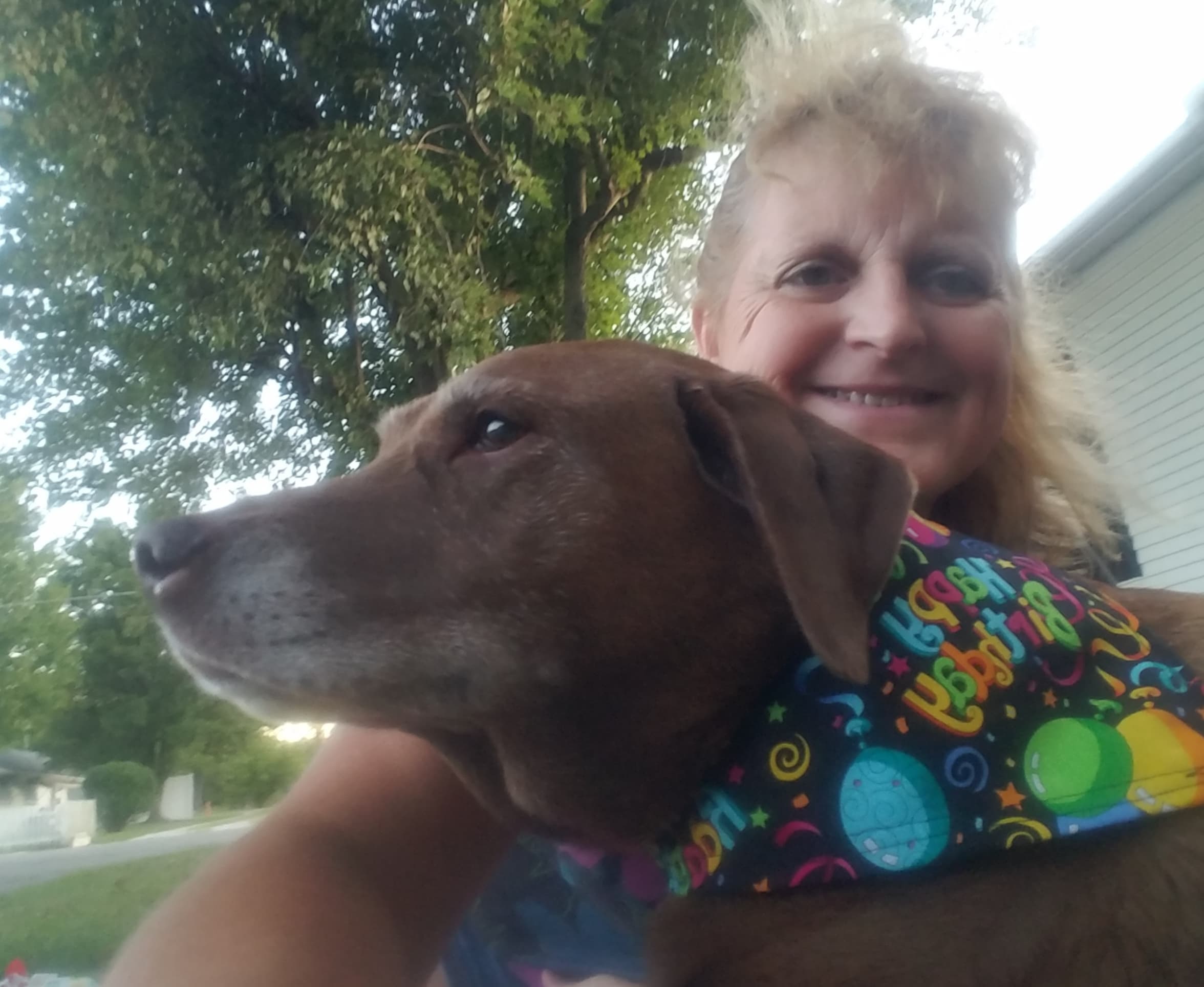 Auck said Dr. McClung has been extremely supportive and continues to share new research and breakthroughs for animal treatment as well as “on the human side”.

“He has been conscientious of cost and has provided many options for cancer treatment from the sonar waves and vitamin C infusion to ozone therapy and an assortment of professional immunotherapy products featuring transfer factors and medicinal mushrooms among other all-natural ingredients,” said Auck. “I found a immunotherapy product with transfer factors on Amazon from “4Life” for humans. Cocoa only had few weeks of intense therapy with the sonar waves and Vitamin C infusions and ozone therapy, and now we have just continued with her vitamins C and D, high-quality CBD oil called Canine Canna-Pet, and the Professional Immune Tabs produced by Raemaker Nutrition that has trained her immune system to attack only cancer cells.”

Auck said she also makes a special yogurt for Cocoa and that last month Dr. McClung gave her the green light to slowly cut back on Cocoa’s I-Tabs by slowly eliminating one at a time to get her on a maintenance dose that has provided continued results at less cost.

“He has had me measure her leg with a tape measure every week noting any changes since our journey began. I do a quick gum check for pinkness and make sure her back is flat without any humping on a regular basis,” Auck said. “The goal is to get her to two consecutive days a week of the I-Tabs and maintain the cancer in a small area if at all.”

Coco’s next milestone will be on Oct. 26, a birthday of sorts, as it will be exactly 12 years since Auck got her as a nine-week-old puppy. 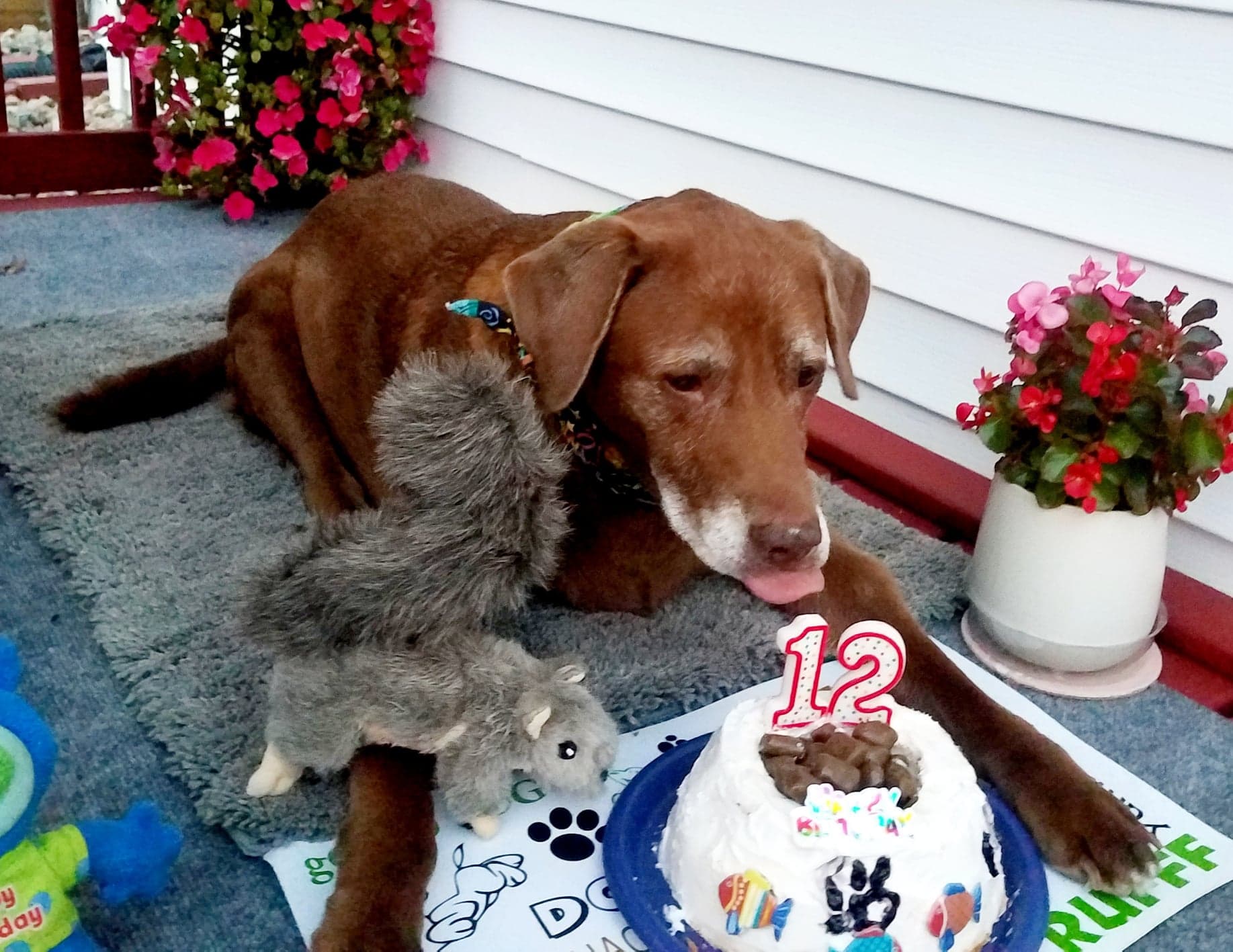 “Even today, she continues to help me cope with life’s challenges. I can’t help but think that God has used her to give me resiliency during this very difficult year. While I have tried to be optimistic that this all-natural treatment would extend her life past the initial four to five months prognosis, I am amazed she is still trying to keep track of me,” Auck said. “Of all the dogs we have had, she has been the most attentive to me. Her paws are the ones I see pushing under the bathroom door!”