MANILA — When Converge ICT Solutions debuts on the Philippine Stock Exchange next week, its initial public offering to raise up to 29 billion pesos ($600 million) will be a welcome exception for one of Asia’s most underperforming stock markets.

The offer size — the biggest in the country in years — is rare and its fiber internet service business, which boomed amid the pandemic, is a breath of fresh air in a bourse dominated by old economy companies.

The IPO of Converge, which is partly owned by Warburg Pincus, the U.S. private equity investor, is only the third in the Philippines this year. It was preceded by retailer Merry Mart Consumer, which raised 1.59 billion pesos, and AREIT, the real estate investment trust of Ayala Land, part of the nation’s oldest conglomerate Ayala Corp. AREIT raised 13.57 billion pesos.

The PSE’s neighbors have attracted many more companies. As of August, the Indonesia Stock Exchange had 37 listings this year while Bursa Malaysia and Stock Exchange of Thailand had listed 13 and nine companies, respectively. The two stock exchanges in Vietnam, with an economy smaller than the Philippines, have had 11 between them this year — almost as many as the 15 in the Philippines since Rodrigo Duterte became president in 2016.

So, despite having one of Asia’s oldest stock exchanges, the Philippines’ roster of 271 publicly traded companies has remained one of the shortest in the region — and the PSE believes the time has come to catch up.

It recently unveiled plans to amend its listing rules with an eye on small companies in which growth has been thrown off course by the pandemic but that are looking to raise funds for recovery.

Among other proposals, the PSE would waive the market capitalization requirement for listings on its main board. For the secondary board, a requirement of positive EBITDA in two of the three fiscal years before filing would be dropped and the three-year operating history requirement would be cut to two. 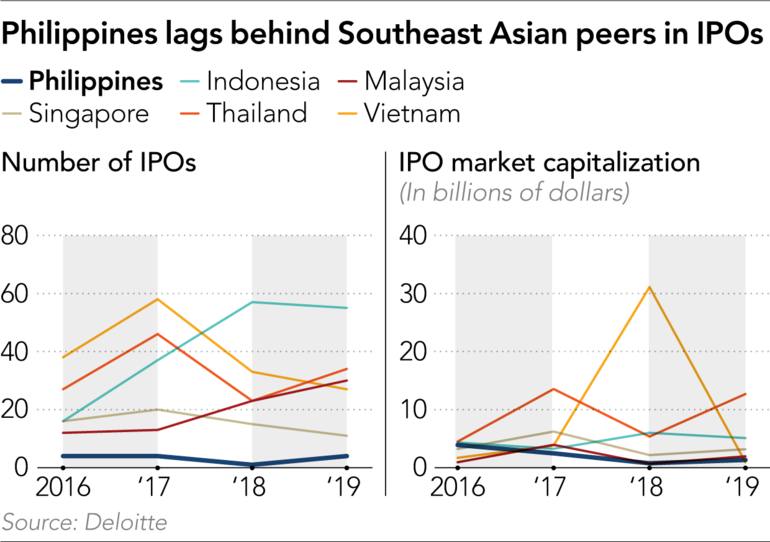 Companies that lack the requisite track record but have demonstrated potential, particularly tech-based start-ups, could also go public through a sponsor.

PSE chief executive Ramon Monzon said the proposed rules, which recently went through public consultation, will help revitalize the economy, which slipped into its first recession in three decades following a lengthy lockdown.

“This big brother model is adopted by various bourses in the region and we think that this will also work in our market,” Monzon said, referring to the sponsored listing. “There are so many SMEs, even start-ups, with very promising business concepts and models that may still not qualify to list even with our proposed SME Board rule revisions.”

The move sparked excitement from market participants long hungry for more investment choices, but with reservations over whether the new rules will spur companies to list.

April Lee-Tan, head of research at online brokerage COL Financial, said the move will help lift the PSE’s profile and boost trading liquidity weakened by the pandemic. “Overseas, there are so many options [to invest in]. We’ve been left behind,” Lee-Tan said. “Once you get used to trading in other markets, you don’t want to trade here any more.”

For start-ups, the PSE’s moves open up an avenue for raising capital at a time when the pandemic has dried up private equity funding. “Fundraising for Philippines’ start-ups before the pandemic was already difficult, but the pandemic made it more difficult,” said Francis Simisim, founder of Wi-Fi advertising solutions start-up Social Light.

JJ Atencio, chairman and CEO of Januarius Holdings, a Philippine venture capital investor, said easing SME listing rules is promising, but he doubts if tech start-ups have a place in the local stock market. Start-ups take time to become profitable while most collapse, he said. “You basically sell it to Philippine investors who may not have the money nor time to wait for 10 years,” said Atencio, who has invested in both tech start-ups and traditional SMEs. “It’s too risky for everybody — for the company, the investors and the PSE.”

Current PSE rules are largely tailored for large and profitable companies as reflected in the 500 million-peso market capitalization requirement, which the PSE is now proposing to scrap.

But some industry insiders say that apart from the PSE’s strict listing rules, companies balk at the prospect of exposing their books to the public and to the state tax agency.

The Philippines charges a 30% corporate income tax rate, the highest in Southeast Asia. A bill endorsed by Duterte seeks to cut that to 20%, which some in the industry hope would lessen incentives to hide real income that has discouraged some from listing.

Meanwhile, many of the usual IPO targets are already big and successful family-owned companies that dread dealing with outsiders or being diluted in a public offering.

“A lot of them were already very profitable. They really don’t need money, so that’s why their thinking was: Why will I do the effort of doing an IPO?” said Eduardo Francisco, president at BDO Capital and Investment, which targets five IPOs annually. “They also want to remain low-profile.”

Investment bankers previously courted leading drug retailer Mercury Drug, homegrown pharmaceutical giant Unilab and Liwayway Marketing, a snack manufacturer with operations in Southeast Asia and China, according to reports. None has announced firm plans to go public in the Philippines.

Francisco doubts whether the proposed listing rule alterations could actually change the minds of companies that wanted to remain private. “These rule changes target companies that really want to list. But for other companies who have long been profitable — even then new rule changes won’t change anything,” Francisco told Nikkei Asia.

Alfred Reiterer, a vocal advocate of greater rights for minority investors in the Philippines, lauded the PSE’s move but hopes the bourse will also finally restrict backdoor listings, which usually involve a takeover of a dormant company as a way to skirt the IPO process and avoid being subject to scrutiny.