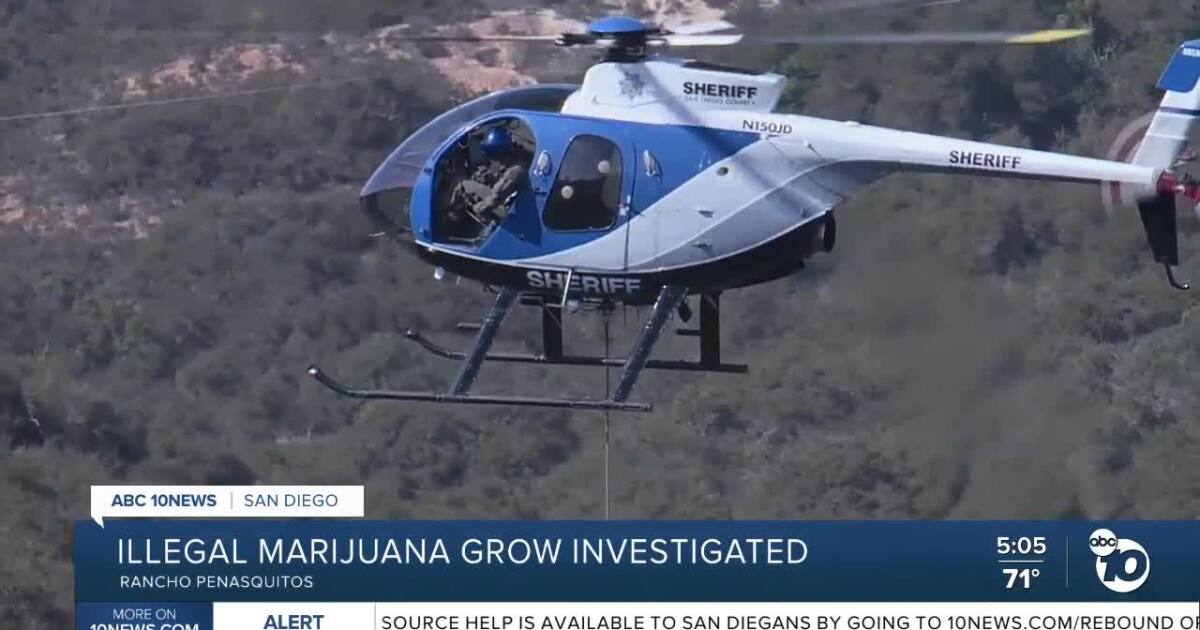 (KGTV) — More than 2,000 marijuana plants with an estimated street value of a million dollars or more were lifted by helicopter out of Rancho Penasquitos Wednesday.

“In a city area to have an outdoor grow of his magnitude is extremely uncommon; we see these frequently in the backcountry,” Sgt. Mark Knierim, Group Supervisor of the DEA Narcotics Task Force Marijuana Eradication Team.

During the plant removal process, Knierim said a second grow location was discovered.

“We found a secondary area, another 50 plants were growing there, and then we found a processing area,” said Knierim.

He said approximately 300 to 500 pounds of processed marijuana ready for distribution were also discovered.

“Based on what we’ve seen historically, I would say this is most likely related to a cartel,” he said.

While recreational marijuana use is legal in California, the high taxes, permits, and fees for legal dispensaries may sway some people to break the rules. Knierim says a cannabis black market is now thriving in San Diego County.

“A black market has been created because of that, because people can do this at a fraction of the cost of having to have a licensed marijuana grow and make just as much money, if not more than what they’re making at the licensed dispensaries,” he explained.

“We’ve seen a tremendous upswing in people obtaining a piece of property, typically in our backcountry area of San Diego County, setting up greenhouses and setting up illegally without having permits,” he said.

While charges related to marijuana are typically misdemeanors in California, the extreme environmental issues with grows like the one discovered can lead to serious consequences.

“You have a lot of environmental issues, and all of those will be felonies,” he said.
Garbage, an encampment, and propane tanks were discovered at the grow in Rancho Penasquitos, but Knierim said other issues typically include native plants and trees being removed and illegal fertilizers and pesticides being used.

“The other issue is pesticides, they’ll put pesticides out there that kill any of the animals that come in the area because the animals will eat their plants,” he said.

The DEA has not yet located anyone responsible for or linked to the illegal operation.