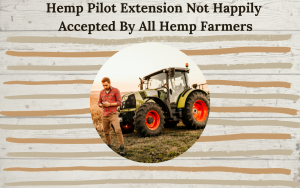 Hemp growers across the nation are aware of the importance that the one-year extension met for the Hemp Pilot Program. With the House voting for the extension and President Trump signing the bill, states that do not have federally approved plans can continue to cultivate their hemp crops for another year under the old regulations.

This will allow states the time they need to prepare a plan to submit to the USDA for approval, as well as allow the USDA to work out any kinks in the program before it is signed off on.

Keep reading to find out more about why some farmers are upset with the newly signed extension.

Hemp farmers and lawmakers were pushing for the extension, as many states, tribes, and territories within the nation would not be ready for the switch to the stricter hemp laws that are being implemented by the United States Department of Agriculture (USDA).

So now, states will continue to be grandfathered into the 2014 less strict regulations. This extension means they have time to finish out their 2020 crop before preparing for new restrictions set by the USDA. However, some see this as an issue because many states have not even begun preparing their plans to submit to the USDA for approval.

Most individuals within the hemp industry were pleased with the delay as it brings stability to hemp businesses that do not yet have USDA-approved plans. However, the industry also recognizes that the USDA needs to make some improvements to their bill before it is fully implemented. Otherwise, the new restrictions could jeopardize the budding hemp industry.

States that are getting another year to work on their federally approved hemp plans include some of the top producers in the nation: Arizona, California, Colorado, Kentucky, Michigan, and Oregon.

While the extension is set for September 30, 2021, to expire, many feel that this could be an issue because it will again come at mid-harvest. So, this means if a state does not get their plans approved in time crops could be jeopardized.

Vermont hemp farmer Herrick Fox, a former USDA executive who worked on rulemaking commented, “I feel it makes more sense to extend to December 2021.” This could happen, as Congress will need to pass a budget before December 11, 2020.

Things that cannot be “fixed” in the appropriations bills before December 2021 will likely be addressed in the 2022 Farm Bill, commented Fox.

Anger In The Air

For the 20 states that have drafted plans that have been approved by the USDA, there is some resentment as they will be placed under a more stringent rule set that will take place on November 1, 2020.

These states feel that the delay created two sets of standards. Meaning those who will continue to operate under the 2014 rule have an advantage over states that are 2018-compliant. They will have an easier time growing hemp that yields high-CBD levels. Those who are operating under USDA-approved plans will have a tough time growing high-CBD hemp without it tipping over the THC threshold of 0.3%.

Farmers in Louisiana will be operating under the stricter THC testing standards, and according to Pat Jack, “They have not spent money, time, or had the resources to plan and commit to the new regulations.” This will pose a disadvantage for them as they enter 2021. Jack continues to say, “They can’t compete with the old hemp states.” Meaning they will have a huge disadvantage compared to those operating under the old regulations.

Andrea Steel, a Houston lawyer, commented on LinkedIn that the double standards for 2021 mean that, “Texas and other states will lose out on another year to get on a level playing field with competitors.” It is easy to see that those states who will now be forced to operate under the new USDA restrictions will have more issues growing crops that comply with regulations that need to be restructured.

Issues With The Rules

There have been complaints about the USDA’s hemp regulations since they were released last fall. Here are the major concerns that hemp farmers are facing:

“If hemp is truly a commodity crop … we need to consider some changes to the way the rules are interpreted to allow for more margin of error for farmers and to allow this crop to get off the ground,” said Josh Schneider, CEO of San Diego-based Cultivaris Hemp. He specifically pointed out the issues with the THC levels to the federal lawmakers.

Many farmers see issues with the 15-day testing window. This new rule would greatly narrow the current 30-day window that farmers are operating under. This could pose as a labor issue when yielding large acres of crop. 15-days is a very tight window and could cause budget issues for many farmers.

While commenting sessions have been held with the USDA, farmers are still anxiously awaiting revisions to the strict regulations that the USDA has put into place. All that they can do is patiently wait and hope that the USDA sees the issues and will make a motion to fix them.

Until then, hemp farmers who fall under the new regulations are not happy with the extension that the remainder of the states has been given. It puts them at a huge disadvantage, which could cause them to lose out on a lot of business.

As a vendor for CBD flowers, we offer the latest news in the industry. We understand the issues that are being faced and want to make sure that our customers have the latest news at their fingertips. After all, if you are unable to get your favorite strains, such as Sour tsunami or Purple Gas you want to know why.

If you have any concerns please do not hesitate to reach out to us here at CBD Flower USA. We are also the proud owners of Oasis Kratom if you would like to check it out.

This content is provided as a membership benefit to our valuable business level members. Due to several factors including the variances in state hemp laws and the differences in interpretation of federal law, NHA makes no warrants of the legality, efficacy or safety of any product, service or statement made by any third party.

We encourage all members and the general public to do their own due diligence on any business or product, and understanding their state’s and federal laws, before choosing to purchase any product or contracting for any service.