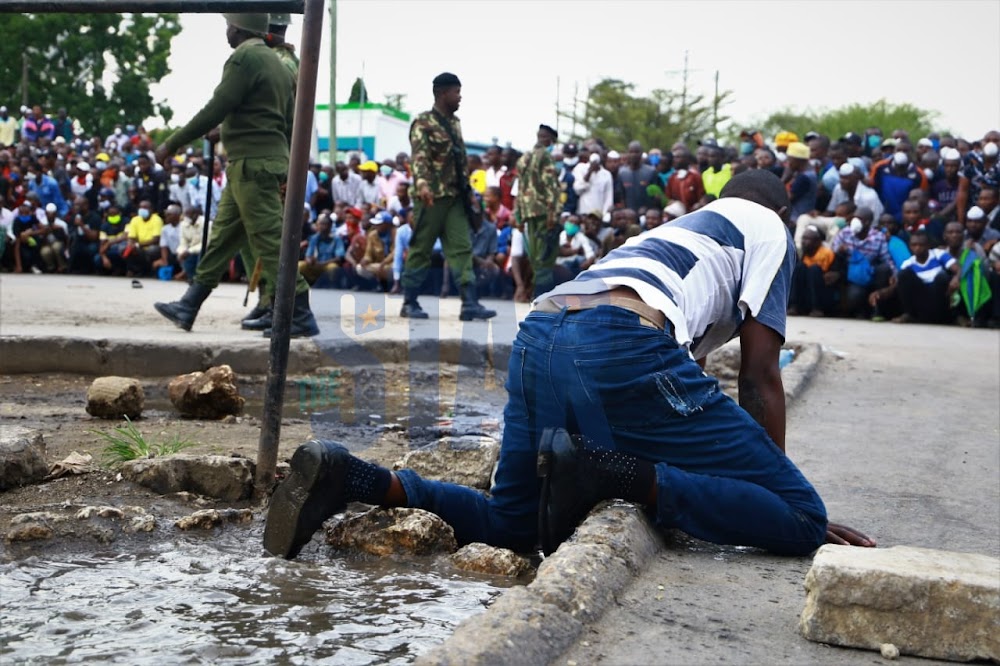 In another video, journalists who tried to film the violence were not spared, some were assaulted by police though journalists and media houses are listed among those who are not affected by the curfew.

In Nairobi, many residents were stranded in the CBD after matatus to various routes closed shop by 5 pm.

Many commuters waited in long queues, hoping that a miracle would get them home on time.

They were whipped and scattered. Women screamed for help.

Some people were forced to trek home, dodging police and security forces.

In the following months, police unleashed a torrent of violence on Kenyans.

According to data from the Independent Policing Oversight Authority, at least 15 people were killed by officers during the first nine weeks of curfew alone.

At least six additional deaths are also being investigated by the IPOA, as well as allegations of shootings, robbery, harassment and sexual assault by police officers.

This brutality prompted a number of political leaders to denounce the violence. They said it would spread the coronavirus rather than contain it.

Faced by public fury over police curfew brutality, the government said the “mishaps” were expected on the first night of the 7 pm to-5 am curfew.

Health CS Mutahi Kagwe said the ‘incidents’ had been reviewed and going forward the situation was expected to improve.

“It was inevitable that mishaps would be there. Going forward, we hope that the situation will be a matter of the past,” he said.

Kagwe rather said employers should release employees in good time so that they can be home in good time before the curfew.

“We are all asked to sacrifice because of this situation and therefore it would be unfair for employers to hold unto employees for them only to be rounded up by security officers before they get home,” he said

Following a public outcry, lawyers called for the resignation of Interior CS Fred Matiang’i over police use of excessive force while implementing the dusk-to-dawn curfew.

Through LSK, the lawyers said the National Police Service had no right or justification whatsoever substituting the penalty imposed on violating the directive with corporal punishment.

LSK President Nelson Havi said the penalty for contravening a curfew was a fine of not more than Sh1,000 or imprisonment for not more than three months, or to both and thus the action of police officers amounted to aggravated assault.

“We condemn the actions of the individual police officers who have assaulted suspects. The Cabinet Secretary for Interior and Co-ordination of National Government who was declared to have contravened Article 10 of the Constitution should take personal responsibility and resign,” Havi said.

“It is evident that Covid-19 will be spread more by actions of police than of those claimed to have contravened the curfew,” he said.

But Police Inspector General Hillary Mutyambai in his defense said he never ordered any police officer implementing the ongoing curfew to terrorise Kenyans.

In an affidavit filed in court, the IG said the police are supposed to implement the curfew within the confines of the law.

Mutyambai dismissed the allegations by Law Society of Kenya of police brutality on grounds that he had not received any reports related to abuse of power. He said he could not act unless they report.

“Instead of advancing public interest, the legal agency has chosen to pursue a populist agenda at a grave period when the entire world is facing a monumental threat on the very basic survival of humanity,” Kibicho said.

He further claimed that LSK has not demonstrated any prejudice it will suffer if the order is issued under the Public Order as opposed to the Public Health Act as the agency has proposed.

But President Uhuru Kenyatta apologised for the excessive force used by police officers.

He added, “If we all work together, and if we all understand that this problem needs all of us and we all pull towards one direction, we will overcome”.

As a result, six police officers were arrested and charged for murders during the implementation of the nationwide curfew.

Ipoa said the six officers had been found guilty of having directly involved themselves in shootings that resulted in deaths while implementing the curfew directives.

“Following investigations by the Independent Policing Oversight Authority and upon an independent review of the case files by the Director of Public Prosecutions, six officers will be arrested and arraigned for various serious offences,” Chairperson Anne Makori said.

According to her, the teacher was shot after one of two police officers responding to a burglary incident opened fire at Usigu market in Siaya County.

“A public inquest on the matter has been going on at the Magistrate’s Court but the ODPP has directed that it be withdrawn in favour of the murder trial,” she said.

In another incident, four police officers are charged for assaulting Abdi Ibrahim Noor.

Noor is said to have sustained a fracture in his leg during an arrest near Gateway Hotel, Garissa.

She added, “The boy was shot while at the balcony of his parent’s home in Kiamaiko, Nairobi on March 30, 2020. The ODPP noted that the evidence is sufficient to sustain trials in courts of law”.

Makori said Ipoa supports officers in maintaining law and order but will not hesitate to act in accordance with its mandate, on the few bad elements that break the same laws they are supposed to enforce.

Earlier on, the Authority said 15 Kenyans have lost their lives in the hands of police as they implement curfew directives.

In a statement, Ipoa said the 15 deaths are among 87 complaints against the police it had received since March 27, when heightened security measures were put in place to combat the spread of Covid-19.

Makori said the deaths were directly linked to the dusk-to-dawn curfew.

“After preliminary investigations, 15 deaths and 31 incidents where victims sustained injuries have directly been linked to actions of police officers during the curfew enforcement,” she said.

Makori said all the cases are currently at different stages of investigations.

“Further, the Authority has dispatched Rapid Response teams to establish the circumstances that led to six other fatalities in the latest incidents,” Makori said.

According to the authority, any use of force that leads to death, serious injury and other grave consequences should be reported immediately to Ipoa.

“It shall be a disciplinary offence for a police officer to fail to report in accordance with these regulations. Following the orders of a superior is no excuse for unlawful use of force,” she said.

The curfew directive has since then left scores of Kenyans arrested and businesses closed for flouting Covid-19 rules.

Majority of those arrested are found drinking in bars beyond stipulated curfew hours, others found without masks while for businesses, operators not adhering to social distancing rules or taking temperatures of customers.

For the businesses, the worst affected are bars, matatus and eateries, where operators adopted the “business as usual” mode.

President Uhuru Kenyatta on November 4 while announcing an extension o the curfew to next year ordered police officers and county government officials step up measures to ensure Kenyans adhere to the laid down protocols.

It is estimated that over 1,000 people have been arrested and charged.