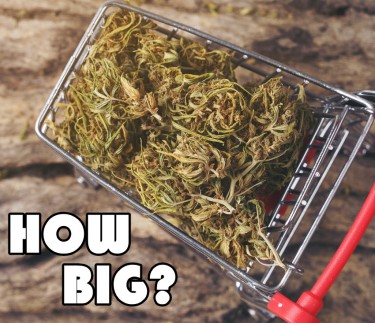 One of the major ripple effects that was expected to come with the legalization of recreational marijuana use in some states is the reduction of black markets. Unfortunately, this has not been the case so far. Prior to the opening of legal markets, black markets were the primary source of cannabis for most consumers and they still are. California for example is a state with a very robust legal market for cannabis yet the illegal market is still larger. It almost seems like the legalization of cannabis in some markets helped to show the government how deeply the black market structures are rooted.

When one hears that the cannabis industry had $52.5 billion in sales in 2018, you’d expect that a larger portion of this will be through legal channels. Unfortunately, this is not the case with the cannabis industry. A whopping $46.4 billion of the total $52.5 billion went to black markets. This shows the degree to which these black markets have been established and how they are cashing out on it.

Black market weed dominates in states where recreational use is legalized

Some states have only legalized medical marijuana use and so it is understandable that recreational users will get their weed from illegal sources. Surprisingly, this same trend occurs in states where recreational use is legalized as well. States like California and Washington have a strong presence of black markets which is gradually affecting the growth of legal dispensaries. This remains a fact that has proven hard to change since the development of legal recreational markets in different states.

One of the prominent factors that has promoted the issue of black markets is the cost of weed. California for example has eight of an ounce of weed sold for $50 legally while it is sold for $20 on the black markets. This fact has helped keep the black markets in the front of cannabis sales and it will take a strong move from entrepreneurs to change it.

Compared to legal markets, black markets face fewer hassles while trying to make products available for consumers. This has made many consumers and producers look to black markets to buy and sell cannabis products. Many legal retailers have to suffer huge retail taxes which in turn affects the price of their weed. They also have to struggle to get licenses while still adhering to strict lab requirements. This is why many prefer to sell black markets that are not restricted by such requirements.

The degree of DEA cannabis seizures from black markets fell by 30 percent in 2017. They had recorded $12.8 million in 2016 before it dropped to $8.3 million in 2017. This shows that the DEA is probably reducing the pressure being mounted on black markets and shifting focus. With a black market size like what is evident in the cannabis industry, the DEA ought to rack in higher numbers in terms of seizures.

You will be surprised to realize that despite the reputation of the West Coast, the most weed per capita in the world is consumed in New York. This reality was brought to light by the data given by Seedo, a cannabis grow supply company that showed they consumed 77.44 tons of weed in 2017. With recreational cannabis use not legalized, this huge market goes into the pockets of black markets in New York. The recreational weed market in New York is projected to be as high as $3.1 billion if legalized.

Outlaw growers are believed to outweigh legal markets in California in production by 5 to 1 according to different estimates. Many grow to sell in other States as well without the issue of licenses, testing, and taxes.

Legal weed can be cheaper than black market weed in Oregon

The state of Oregon took a giant step to help slash the price of legal weed. The state allows growers to apply for multiple licenses and a low licensing fee. This has culminated in a 50 percent drop in the price of weed meaning the legal market can have an edge over the black markets.

Many black market producers make use of private homes to produce a large quantity of weed. A legal loophole in Colorado allowed residents to grow up to 99 cannabis plants at home and this helped the black markets. Things changed when the loophole was changed and a maximum of 16 plants per house was permitted.

WHAT TO KNOW ABOUT BLACK MARKET WEED, READ MORE… 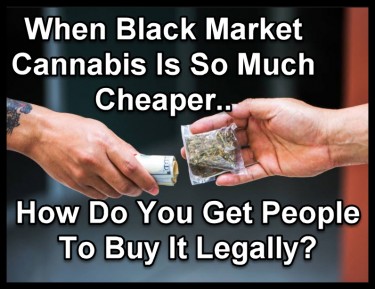 HOW DO YOU GET PEOPLE TO BUY LEGAL WEED WHEN THE BLACK MARKET IS CHEAPER? 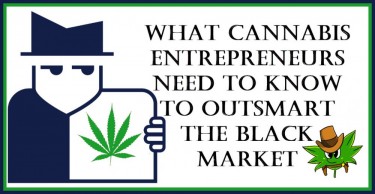 HOW CANNABIS COMPANIES CAN OUTSMART THE BLACK MARKET?